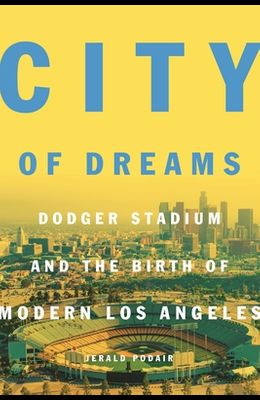 City of Dreams: Dodger Stadium and the Birth of Modern Los Angeles

A vivid history of the controversial building of Dodger Stadium and how it helped transform Los Angeles When Walter O'Malley moved his Brooklyn Dodgers to Los Angeles in 1957 with plans to construct a new ballpark, he ignited a bitter half-decade dispute over the future of a rapidly changing city. For the first time, City of Dreams tells the full story of the controversial building of Dodger Stadium and how it helped create modern Los Angeles. In a vivid narrative, Jerald Podair tells how the city was convulsed over whether, where, and how to build the stadium. Eventually, it was built on publicly owned land from which the city had uprooted a Mexican American community, raising questions about the relationship between private profit and public purpose. Indeed, the battle over Dodger Stadium crystallized issues with profound implications for all American cities. Filled with colorful stories, City of Dreams will fascinate anyone who is interested in the history of the Dodgers, baseball, Los Angeles, and the modern American city.

From the Back Cover When the Dodgers left Brooklyn, their troubles had just begun. Jerald Podair's account of the Los Angeles end of the story superbly chronicles the fierce collisions that ensued, pitting private power against the public good. The creation of Dodger Stadium also created modern Los Angeles, which makes this book an indispensable contribution to the history of modern urban America. --Sean Wilentz, Princeton University What is the price of a game? What is it worth to a city and its residents to boast a professional sports franchise? These questions need to be answered--but seldom are--before urban leaders make deals to build stadiums, often with staggering implications for their cities. City of Dreams is required reading for anyone who cares about how our sports obsession affects the urban landscape. --Randy Roberts, coauthor of Blood Brothers: The Fatal Friendship Between Muhammad Ali and Malcolm X City of Dreams documents the steep social price Los Angeles paid when, fifty years ago, its power elite used the highly subsidized Dodger Stadium to launch the city into modernity. To what ends and to whose benefit, Podair asks? Hard questions, indeed, that other American cities with subsidized stadiums are asking too. --Kevin Starr, University of Southern California There's a real need for this book. There is no other go-to source on the story of Dodger Stadium in the history of Los Angeles, a subject that offers a fascinating look at midcentury L.A. Jerald Podair helps us understand a complex story of urban vision, sports, politics, and public-private tug of war, offering a corrective to much folklore, hyperbole, and misinformation. --William Deverell, coauthor of Water and Los Angeles: A Tale of Three Rivers, 1900-1941