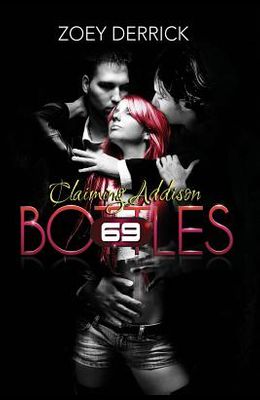 Book #1 in the 69 Bottles Series
by
Zoey Derrick

For Addison Beltrand, PR rep for Bold International, Inc. climbing the corporate ladder is all that matters in life. Her hard work is finally rewarded with the promotion she's worked her ass off to earn-but the gig comes at a price. She leaves in two days for a twelve-week tour with America's hottest alternative rock band, 69 Bottles. Talon Carver, lead singer of 69 Bottles, has no problem with women--as long as they're gone by morning. When Addison shakes up his world, it's a huge problem-compounded by the fact that Addison's not the only one he wants. Kyle Black, manager of 69 Bottles, has a secret. He and Addison are closer than she thinks, but telling her could keep her away. When Talon sets his sights on Addison, Kyle uses his secret to push her into Talon's arms, only to discover she isn't the only one he needs. Two men. One dilemma. Talon is wild, reckless and loves control. Kyle is calm, collected and loves passion. The perfect balance...or Addison's ultimate undoing? Talon and Kyle push their boundaries and Addison's, but can they throw their reservations to the wind and claim her together? Two men. One woman. A rock band. A tour bus. One Wild Ride... ****Content Warning**** Sexy, naked, bisexual rock stars...and a lot more... This book contains, but is not limited to the following sexual content - reader discretion is advised - hot sex between two men and one woman. M/M/F, M/F/M, M/F, F/M and M/M sexual content. There are no boundaries when these three crash together, as long as you're over 18 years of age.