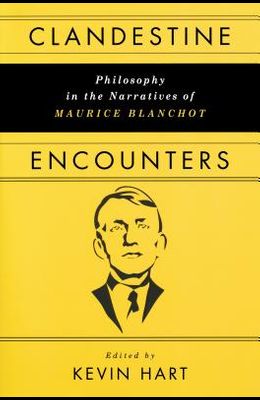 Clandestine Encounters: Philosophy in the Narratives of Maurice Blanchot

Maurice Blanchot is perhaps best known as a major French intellectual of the twentieth century: the man who countered Sartre's views on literature, who affirmed the work of Sade and Lautreamont, who gave eloquent voice to the generation of '68, and whose philosophical and literary work influenced the writing of, among others, Jacques Derrida, Gilles Deleuze, and Michel Foucault. He is also regarded as one of the most acute narrative writers in France since Marcel Proust.In Clandestine Encounters, Kevin Hart has gathered together major literary critics in Britain, France, and the United States to engage with Blanchot's immense, fascinating, and difficult body of creative work. Hart's substantial introduction usefully places Blanchot as a significant contributor to the tradition of the French philosophical novel, beginning with Voltaire's Candide in 1759, and best known through the works of Sartre. Clandestine Encounters considers a selection of Blanchot's narrative writings over the course of almost sixty years, from stories written in the mid-1930s to L'instant de ma mort (1994). Collectively, the contributors' close readings of Blanchot's novels, recits, and stories illuminate the close relationship between philosophy and narrative in his work while underscoring the variety and complexity of these narratives.Blanchot's narratives are here read with the care, patience, and thoroughness they deserve. The collection sustains a remarkable intensity of engagement throughout, in so doing opening these narratives out to their necessary contexts--philosophical, of course; but also literary, political, theological, and biographical--with welcome dedication and integrity. The volume makes a timely and decisive contribution to its field, where it will form a major point of reference. --Martin Crowley, Queens' College, University of CambridgeThis outstanding collection--lucid, engaging, generous--illuminates Blanchot and the very notion of 'the philosophical.' --Gerald Prince, University of PennsylvaniaThis collection contains some very important pieces on a major figure of twentieth-century modernism. Blanchot now has a much wider audience in North American than he did even a few years ago when it was mostly experimental fiction writers like Paul Auster, Lydia Davis, R. M. Berry, and Steve Tomasula--not literary critics--who took an interest in Blanchot's literary writings. The focus on the 'narratives' (or, better, 'fictions') sets this volume apart from, and makes it a good deal more stimulating than, other recent collections of essays on Blanchot. --Gerald Bruns, University of Notre Dame