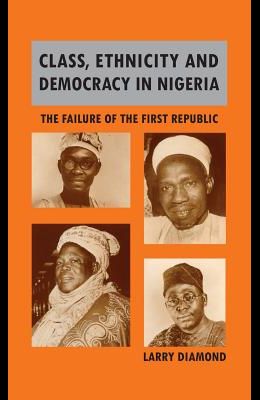 Class, Ethnicity, and Democracy in Nigeria: The Failure of the First Republic

The overthrow in January 1966 of Nigeria's First Republic erased what had been regarded as perhaps the most promising prospect for liberal democracy in post-colonial Africa. Marking the sweeping failure of parliamentary institutions across a continent of new nations, it accelerated the slide into a ghastly civil war. Class, Ethnicity and Democracy is the first scholarly study to analyze the evolution, decay, and failure of Nigeria's First Republic and to weigh this crucial experience against theories of the conditions for stable democratic government. Rejecting explanations that focus on political culture, political institutions, or ethnic competition and conflict, Larry Diamond identifies the root of Nigeria's democratic failure in the interrelationship between class, ethnic and state structures. This led the emergent dominant class in each region to mobilize and exploit ethnicity and to trample the democratic process in furious competition for state control, since that control was the primary means for accumulating wealth and consolidating class dominance. Tracing the polarization of conflict and the erosion of legitimacy through five major crises, Diamond presents a new methodology for analyzing the persistence and failure of democracies and points to the relationship between state and society as a crucial determinant of the possibility for liberal democracy.