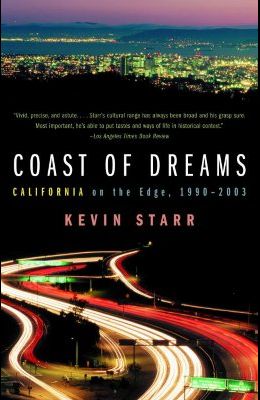 Book #8 in the Americans and the California Dream Series
by
Kevin Starr
$18.95
Select Format

In this extraordinary book, Kevin Starr--widely acknowledged as the premier historian of California--probes the possible collapse of the California dream and the beginning of another in the years 1990-2003.

From the front Cover In this extraordinary book, Kevin Starr-widely acknowledged as the premier historian of California, the scope of whose scholarship the Atlantic Monthly has called breathtaking-probes the possible collapse of the California dream in the years 1990--2003. In a series of compelling chapters, Coast of Dreams moves through a variety of topics that show the California of the last decade, when the state was sometimes stumbling, sometimes humbled, but, more often, flourishing with its usual panache. From gang violence in Los Angeles to the spectacular rise-and equally spectacular fall-of Silicon Valley, from the Northridge earthquake to the recall of Governor Gray Davis, Starr ranges over myriad facts, anecdotes, news stories, personal impressions, and analyses to explore a time of unprecedented upheaval in California. Coast of Dreams describes an exceptional diversity of people, cultures, and values; an economy that mirrors the economic state of the nation; a battlefield where industry and the necessities of infrastructure collide with the inherent demands of a unique and stunning natural environment. It explores California politics (including Arnold Schwarzenegger's election in the 2003 recall), the multifaceted business landscape, and controversial icons such as O. J. Simpson. Historians of the future, Starr writes, will be able to see with more certainty whether or not the period 1990-2003 was not only the end of one California but the beginning of another; in the meantime, he gives a picture of the place and time in a book at once sweeping and riveting in its details, deeply informed, engagingly personal, and altogether fascinating. From the Hardcover edition.

Americans and the California Dream Series In Order - By Kevin Starr