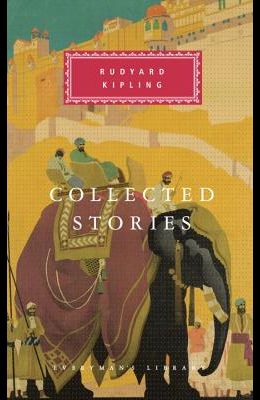 by
Rudyard Kipling and Robert Gottlieb

As a young writer living in Lahore during the time of the British Raj, Rudyard Kipling (1865&shy;-1936) was possessed by an enormous subject--India--and his genius for rendering its beauty and strangeness was even then so fully formed that we have to look to the likes of Shakespeare and Dickens to find writers equally precocious. What is even more astonishing, and what this selection of stories from across his entire career reveals, is the way that his talent grew and developed over time. The work he did toward the end of his long writing life is even better than that which marked its splendid beginnings. The forty stories collected here range across a surprising variety of subjects and techniques. Here are his superb war stories, Mary Postgate, The Gardener, and The Drums of the Fore and Aft, as well as his famous forays into horror in The Mark of the Beast, science fiction in With the Night Mail, and the ghost story in The House Surgeon. The Man Who Would Be King is an unforgettable adventure tale, 'Love-o'-Women' and Without Benefit of Clergy reveal his insight into love and passion, and Baa Baa, Black Sheep is a searing revisiting of Kipling's childhood trauma. From the nightmarish allegory of The Strange Ride of Morrowbie Jukes and the mystical visions in The Bridge-Builders to the brilliant portrait of obsession and sacrifice in his masterpiece, The Wish House, these stories showcase Kipling's remarkable narrative gifts.

From the Back Cover Everything about Kipling is extreme--the abundance of his talent, his precocity, his early fame and success, the variety of literary forms he mastered, the passionate admiration and loathing he evoked in critics and readers, the contradictions within him, the contradictions in the way he has been perceived, both during his life and after his death.