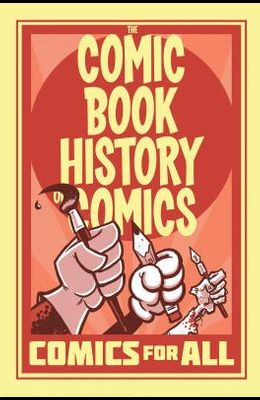 Comic Book History of Comics: Comics for All

The medium is the message Comics come in many forms, from all around the world. What better way to discover them than through a comic book? The bestselling, mind-blowing graphic history of our favorite medium continues--now focusing on specific regions of the world and their contributions to the comic book art form. The Graphic Novel From its Swiss roots in 1835 to today's American bestseller lists, with crucial spin-offs in France and Belgium. The British Invasion 2000 AD had a big impact in 1986, as creators from across the pond elevated storytelling to new heights, but the British tradition stretches back much further. Manga Japanese artists also have a long history of graphic storytelling, but ninjas, mecha, and magical girls have taken the world by storm in recent decades, and those are only scratching the surface. Undiscovered territory Comics and their characters are everywhere, for everyone From the digital revolution to comic characters in film, comics have never been more widely available, or appealed to more diverse audiences. Now in color, with added features, including HerStory of Comics: spotlights on influential female creators and their impacts on the form.