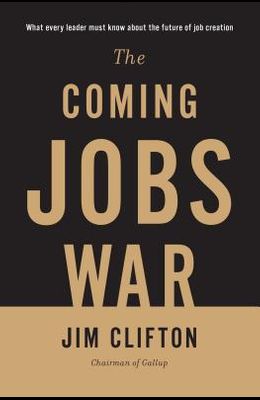 Clifton explains why jobs are the new global currency for leaders. More than peace or money or any other good, leaders who can create good jobs will own the future. The problem is that leaders don't know how to create jobs--especially in America. Society needs to realize that entrepreneurs, not government, are the source of new jobs and put all its energy behind them.

From the front Cover WHAT EVERYONE IN THE WORLD WANTS IS A GOOD JOB In a provocative book for business and government leaders, Gallup Chairman Jim Clifton describes how this undeniable fact will affect all leadership decisions as countries wage war to produce the best jobs. Leaders of countries and cities, Clifton says, should focus on creating good jobs because as jobs go, so does the fate of nations. Jobs bring prosperity, peace, and human development but long-term unemployment ruins lives, cities, and countries. Creating good jobs is tough, and many leaders are doing many things wrong. They re undercutting entrepreneurs instead of cultivating them. They re running companies with depressed workforces. They re letting the next generation of job creators rot in bad schools. A global jobs war is coming, and there s no time to waste. Cities are crumbling for lack of good jobs. Nations are in revolt because their people can t get good jobs. The cities and countries that act first that focus everything they have on creating good jobs are the ones that will win.