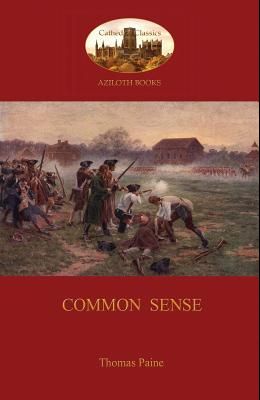 Thomas Paine was born at Thetford, England, in 1737. The son of a corset-maker, he spent just six years in formal education, yet despite these social disadvantages he became one of the foremost writers of his time. Paine espoused the cause of the ordinary citizen in works that spoke with refreshing directness compared to the turgid circumlocutions of the moneyed aristocracy and academia. Paine emigrated to the American Colonies in 1774 and discovered a society seething with repressed resentment against the impositions of the British Crown. Sparked by the rightness of their cause, he produced 'Common Sense', a pamphlet that gathered together the scattered arguments for Independence and presented them as a powerful single thesis for change. Paine argued that Hereditary Right was no basis upon which to found efficient government, and that the British monarchy (and its aristocrats) could make no valid claim on the colonists' wealth or loyalty. The pamphlet struck a deep chord with the population - selling a phenomenal 100,000 copies in its first two months - and crystalising the American desire for national independence. 'Common Sense' has since inspired many struggling for independence, and Paine's uncompromising demand for human rights has made him a symbol of social justice the world over.

USA sense in Polish Series In Order - By Thomas Paine