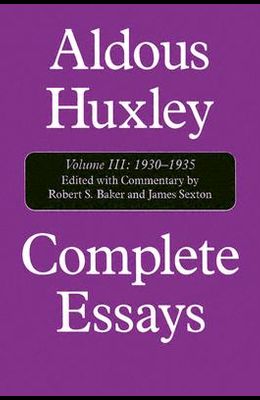 by
Aldous Huxley and Robert S Baker and James Sexton

This third volume of a projected six reinforces Huxley s stature as one of the most acute and informed observers of the social and ideological trends of the years between the world wars. It contains the important collection of essays Music at Night as well as the majority of Huxley s journalistic writing for the Hearst newspapers in the United States and for a variety of British periodicals such as Nash s Pall Mall Magazine, the Evening Standard, and Time and Tide. Much of the attraction of the Hearst essays lies in their vivid period detail: references to the raucous voices of Nazi broadcasters, speeches by Roosevelt and Stalin, Soviet five-year plans, and the effects of the Great Depression combine to provide a rich context for Huxley s increasingly active role in organized pacifism and his sense of standing on the threshold of a new era. The essays of Music at Night define this trend as the New Romanticism, a celebration of Enlightenment modernity and an excessive faith in instrumental reason and applied science. Huxley was both intrigued by and suspicious of state planning and centralized bureaucratic authority. The essays in Volume III (and the volume to follow) register his growing ambivalence about the role of technocracy and science in an era of experimentation in the concentration of executive and legislative power. At their best, Huxley s essays stand among the finest examples of the genre in modern literature. He was among the few writers who...played with ideas so freely, so gaily, with such virtuosity, that the responsive reader...was dazzled and excited. Isaiah Berlin.