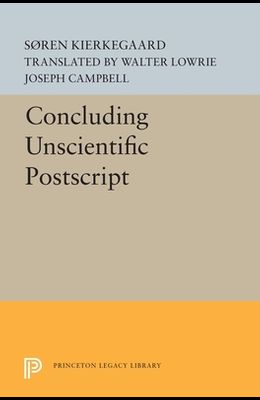 Contents include: Foreword Editor's Preface Introduction by the Editor Preface Introduction BOOK ONE: The Objective Problem Concerning the Truth of Christianity Introductory Remarks Chapter I: The Historical Point of View 1. The Holy Scriptures 2. The Church 3. The Proof of the Centuries for the Truth of Christianity Chapter II: The Speculative Point of View BOOK TWO: The Subjective Problem, The Relation of the Subject to the Truth of Christianity, The Problem of Becoming a Christian PART ONE: Something About Lessing Chapter I: An Expression of Gratitude Chapter II: Theses Possibly or Actually Attributable to Lessing 1. The subjective existing thinker has regard to the dialectics of the process of communication 2. The existing subjective thinker is in his existential relation to the truth as negative as he is positive; he has a much humor as he has essential pathos; and he is constantly in process of becoming, i.e. he is always striving 3. Lessing has said that accidental historical truths can never serve as proofs for eternal truths of the reason; and that the transition by which it is proposed to base an eternal truth upon historical testimony is a leap 4. Lessing has said that, if God held all truth in His right hand, and in His left the lifelong pursuit of it, he would choose the left hand A. A logical system is possible B. An existential system is possible PART TWO: How the Subjectivity of the Individual Must be Qualified in Order that the Problem May Exist for Him Chapter I: The Task of Becoming Subjective. The conclusion that would be forced upon ethics if the attainment of subjectivity were not the highest task confronting a human being-Considerations left out of account in connection with the closer understanding of this-Examples of thinking directed towards becoming subjective Chapter II: The Subjective Truth, Inwardness; Truth is Subjectivity Appendix. A Glance at the Contemporary Effort in Danish Literature Chapter III: Real or Ethical Subjectivity-The Subjective Thinker 1. Existence and Reality 2. Possibility as higher than Reality-Reality as higher than Possibility-Poetic and Intellectual Ideality-Ethical Ideality 3. The Simultaneity of the Individual Factors of Subjectivity in the Existing Subject-The Constrast between this Simultaneity and the Speculative Process 4. The Subjective Thinker-his Task, his Form, his Style Chapter IV: The Problem of the Fragments: How can an Eternal Happiness be based upon Historical Knowledge? Section I. For Orientation in the Plan of the Fragments 1. That the point of departure was taken in the pagan consciousness, and why 2. The importance of a preliminary agreement concerning what Christianity is, before there can be any question of mediating between Christianity and speculative thought. The absence of such an agreement favors the proposal of medication, while at the same time making any mediation illusory; the presence of such an agreement precludes mediation 3. The problem of the Fragments viewed as a problem, introductory not to Christianity, but to becoming a Christian Section II. The Problem Itself. The eternal happiness of the individual is decided in time through the relationship to something historical, which is furthermore of such a character as to oinclude in its composition that which by virtue of its essence cannot become historical, and must therefore become such by virtue of the absurd A. Existential Pathos 1. The Initial Expression for Existential Pathos: the absolute direction (respect) toward the absolute telos, expressed in action through the transformation of the individual's existence Aesthetic Pathos-The deceptiveness of the principle of mediation-The medieval monastic movement-The simultaneous maintenance of an absolute relationship to the