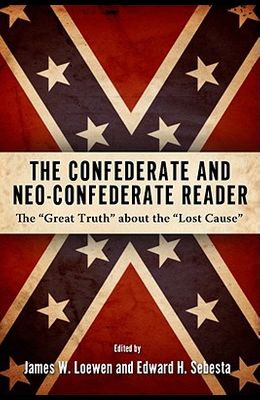 Confederate and Neo-Confederate Reader: The great Truth about the lost Cause

by
and James W Loewen and Edward H Sebesta

Most Americans hold basic misconceptions about the Confederacy, the Civil War, and the actions of subsequent neo-Confederates. For example, two thirds of Americans--including most history teachers--think the Confederate States seceded for states' rights. This error persists because most have never read the key documents about the Confederacy. These documents have always been there. When South Carolina seceded, it published Declaration of the Immediate Causes Which Induce and Justify the Secession of South Carolina from the Federal Union. The document actually opposes states' rights. Its authors argue that Northern states were ignoring the rights of slave owners as identified by Congress and in the Constitution. Similarly, Mississippi's Declaration of the Immediate Causes ... says, Our position is thoroughly identified with the institution of slavery--the greatest material interest of the world. Later documents in this collection show how neo-Confederates obfuscated this truth, starting around 1890. The evidence also points to the centrality of race in neo-Confederate thought even today and to the continuing importance of neo-Confederate ideas in American political life. The 150th anniversary of secession and civil war provides a moment for all Americans to read these documents, properly set in context by award-winning sociologist and historian James W. Loewen and co-editor, Edward H. Sebesta, to put in perspective the mythology of the Old South.