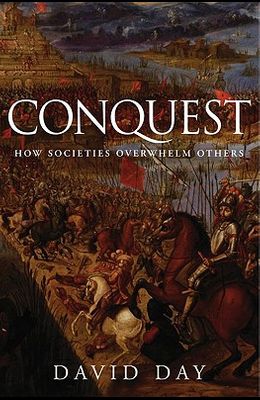 Conquest: How Societies Overwhelm Others

In this bold, sweeping book, David Day surveys the ways in which one nation or society has supplanted another, and then sought to justify its occupation - for example, the English in Australia and North America, the Normans in England, the Spanish in Mexico, the Japanese in Korea, the Chinese in Tibet. Human history has been marked by territorial aggression and expanion, an endless cycle of ownership claims by dominant cultures over territory occupied by peoples unable to resist their advance. Day outlines the strategies, violent and subtle, such dominant cultures have used to stake and bolster their claims - by redrawing maps, rewriting history, recourse to legal argument, creative renaming, use of foundation stories, tilling of the soil, colonization and of course outright subjugation and even genocide. In the end the claims they make reveal their own sense of identity and self-justifying place in the world. This will be an important book, an accessible and captivating macro-narrative about empire, expansion, and dispossession.

Books similiar to Conquest: How Societies Overwhelm Others

List of All Editions of Conquest: How Societies Overwhelm Others