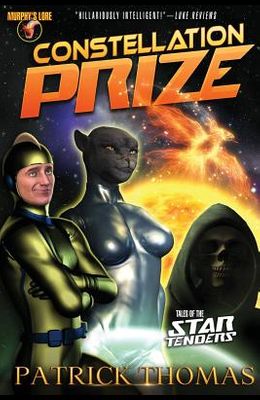 Sometime in the not so distant future... In the wake of the destruction of New York City by a mad god, legends and former barflies of Bulfinche's Pub venture out to distant worlds as Startenders in order to help those in need, both human and alien. Join former bartender John Murphy, the head honcho of the barship Fools' Glory and its crew of tricksters - Loki, Coyote, the daughter of Pan, a dragon demi-goddess, a golden melog and a sentient plant in their latest adventures as they are called upon to stop the bastart descendants of Bast from achieving godhood with the help of an intergalactic spy network run by cats; are recruited by the Grim Reaper himself to stop a serial killer who slaughters entire planets; go on a collection job to the planet of Ogra to negotiate with a city's ruler, a woman who would rather let billions die than pay her whiskey bill; rescue an old friend from the emperor god of the interstellar Goblin Empire; work to stop a terrorist plot in orbit around the Earth; try to prevent a dying star from going supernova and wiping out three inhabited worlds and find the ultimate constellation prize. Praise for Startenders from the cast and crew: Just when you think he can't get any better, Murphy manages to top himself and he hits one out of the solar system, - Murphy's mom Better than a year's supply of catnip, - Bast, cat-headed Egyptian goddess, Startender and head of the Cynosure spy network Murphy's okay, but he's not that great. He was dumb enough to let me on his crew and foolish enough to lose a bet with me, which explains why he's wearing that ridiculous spandex sci-fi jumpsuit on the cover, - Coyote, Native American trickster god, Startender Hilariously intelligent, -Luke Reviews