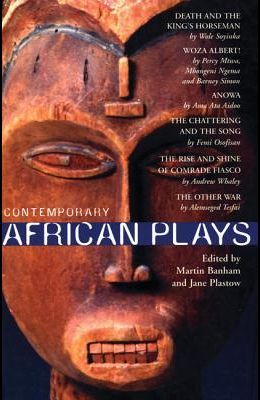 by
Wole Soyinka and Percy Mtwa and Ama Aidoo

Contemporary African Plays , edited with Introductions by Martin Banham and Jane Plastow of Leeds University, is a collection of some of the most exciting plays from the past twenty-five years of African theatre, spanning the continent's rich and disparate regional and cultural traditions. Included in this collection are three of the most significant plays of this century plus three brilliant plays which will be new to Western audiences: Death and the King's Horseman - A masterpiece from the Nobel-prize-winning Nigerian writer Wole Soyinka Woza Albert - A skilful and devastating political satire from South Africa by the writers/performers Percy Mtwa and Mbongeni Ngema and Market Theatre director, the late Barney Simon Anowa - A powerful tale from Ghana which tells of a woman's plight and oppression by Ama Ata Aidoo The Chattering and the Song - An ingenious radical drama from the popular Nigerian playwright Femi Osofisan The Rise and Shine of Comrade Fiasco - A witty political allegory about post-colonial Zimbabwe, by Andrew Whaley The Other War - An extraordinary insight into Africa's longest liberation war, by the Eritrean playwright Alemseged TesfaiThe only current anthology to survey the rich variety of contemporary African drama The plays included in this volume are: Death and the King's Horseman by Wole Soyinka; Anowa by Ama Ata Aidoo; The Chattering and the Song by Femi Osofisan; The Rise and Shine of Comrade Fiasco by Andrew Whaley; Woza Albert by Percy Mtwa, Mbongeni Ngema and Barney Simon; and The Other War by Alemseged Tesfai. Contemporary African Drama brings together some of the best writers writing from an African viewpoint today.