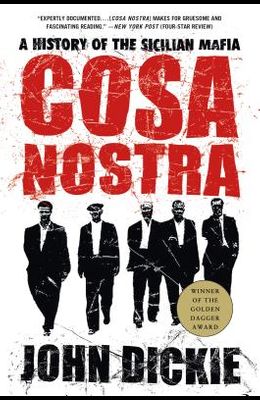 Cosa Nostra: A History of the Sicilian Mafia

Hailed in Italy as the best book ever written about the mafia in any language, Cosa Nostra is a fascinating, violent, and darkly comic account that reads like fiction and takes us deep into the inner sanctum of this secret society where few have dared to tread.In this gripping history of the Sicilian mafia, John Dickie uses startling new research to reveal the inner workings of this secret society with a murderous record. He explains how the mafia began, how it responds to threats and challenges, and introduces us to the real-life characters that inspired the American imagination for generations, making the mafia an international, larger than life cultural phenomenon. Dickie's dazzling cast of characters includes Antonio Giammona, the first boss of bosses''; New York cop Joe Petrosino, who underestimated the Sicilian mafia and paid for it with his life; and Bernard the Tractor Provenzano, the current boss of bosses who has been hiding in Sicily since 1963.

Books similiar to Cosa Nostra: A History of the Sicilian Mafia

List of All Editions of Cosa Nostra: A History of the Sicilian Mafia