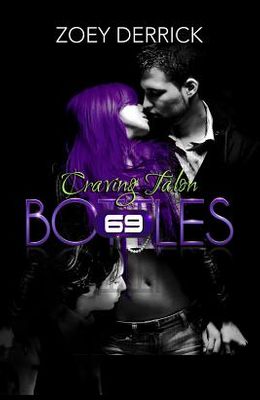 Book #2 in the 69 Bottles Series
by
Zoey Derrick

I'm so enamored with this series Such a lovely combination of sweet romance, laughter, awesome dialogue, rock star antics, and of course... panty-melting Erotica. - 5 Star Review from The Smutsonian Rock hard once again with Zoey Derrick's sizzling hot rock & roll series The story picks up as 69 Bottles continues their tour, riding a surge of success thanks to an impromptu duet between Talon and Addison. It's a crazy turn of life for Addison Beltrand, who's always lived to work and worked to live. Now, everything is shifted upside down-and that's not a bad thing. Stepping on the 69 Bottles tour bus has banished the heartache of her past, and feels like a rocking new beginning. Talon Carver and Kyle Black couldn't agree more. The band's lead singer and manager are falling hard for the beautiful rock chick, and will do anything to keep her in their bed-and between their bodies-forever. The trio's blissful bubble is popped by a danger nobody has anticipated. The band's security team, always watchful for fan attacks on the members, isn't prepared for what happens to Addison during this leg of the tour. Will Kyle and Talon be able to help save Addison? Or will her fear force her to pack her bags and return to LA? Everything hinges on her decision... Two men. One woman. A rock band. A tour bus. One Wild Ride... ****Content Warning**** Sexy, naked, bisexual rock stars...and a lot more... This book contains, but is not limited to the following sexual content - reader discretion is advised - hot sex between two men and one woman. M/M/F, M/F/M, M/F, F/M and M/M sexual content. There are no boundaries when these three crash together, as long as you're over 18 years of age.