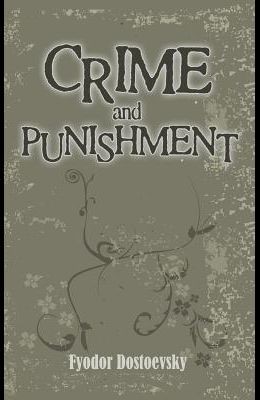 Raskolnikov, a conflicted former student, lives in a tiny, rented room in Saint Petersburg. He refuses all help, even from his friend Razumikhin, and devises a plan to murder and to rob an unpleasant elderly pawn-broker and money-lender, Alyona Ivanovna. His motivation comes from the overwhelming sense that he is predetermined to kill the old woman by some power outside of himself. While still considering the plan, Raskolnikov makes the acquaintance of Semyon Zakharovich Marmeladov, a drunkard who recently squandered his family's little wealth. Raskolnikov also receives a letter from his sister and mother, speaking of their coming visit to Saint Petersburg, and his sister's sudden marriage plans which they plan to discuss upon their arrival. After much deliberation, Raskolnikov sneaks into Alyona Ivanovna's apartment, where he murders her with an axe. He also kills her half-sister, Lizaveta, who happens to stumble upon the scene of the crime. Shaken by his actions, Raskolnikov manages to steal only a handful of items and a small purse, leaving much of the pawn-broker's wealth untouched. Raskolnikov then flees and, due to a series of coincidences, manages to leave unseen and undetected. After the bungled murder, Raskolnikov falls into a feverish state and begins to worry obsessively over the murder. He hides the stolen items and purse under a rock, and tries desperately to clean his clothing of any blood or evidence. He falls into a fever later that day, though not before calling briefly on his old friend Razumikhin. As the fever comes and goes in the following days, Raskolnikov behaves as though he wishes to betray himself. He shows strange reactions to whoever mentions the murder of the pawn-broker, which is now known about and talked of in the city. In his delirium, Raskolnikov wanders Saint Petersburg, drawing more and more attention to himself and his relation to the crime. In one of his walks through the city, he sees Marmeladov, who has been struck mortally by a carriage in the streets. Rushing to help him, Raskolnikov gives the remainder of his money to the man's family, which includes his teenage daughter, Sonya, who has been forced to become a prostitute to support her family. As the novel progresses, Raskolnikov is introduced to the detective Porfiry, who begins to suspect him of the murder purely on psychological grounds. At the same time, a chaste relationship develops between Raskolnikov and Sonya. Sonya, though a prostitute, is full of Christian virtue and is only driven into the profession by her family's poverty. The rest of the story is full of interesting twists and turns. The epilogue tells of how Raskolnikov is sentenced to eight years of penal servitude in Siberia, where Sonya follows him. The novel has stood the test of time and has been a best-seller ever since it was published

0
|   0  reviews
Did you read Crime and Punishment? Please provide your feedback and rating to help other readers.
Write Review