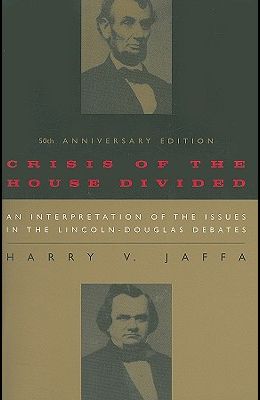 Crisis of the House Divided: An Interpretation of the Issues in the Lincoln-Douglas Debates, 50th Anniversary Edition

Crisis of the House Divided is the standard historiography of the Lincoln-Douglas debates. Harry Jaffa provides the definitive analysis of the political principles that guided Lincoln from his reentry into politics in 1854 through his Senate campaign against Douglas in 1858. To mark the fiftieth anniversary of the original publication, Jaffa has provided a new introduction. Crisis of the House Divided has shaped the thought of a generation of Abraham Lincoln and Civil War scholars.--Mark E. Needly, Jr., Civil War History An important book about one of the great episodes in the history of the sectional controversy. It breaks new ground and opens a new view of Lincoln's significance as a political thinker.--T. Harry Williams, Annals of the American Academy of Political and Social Sciences A searching and provocative analysis of the issues confronted and the ideas expounded in the great debates. . . . A book which displays such learning and insight that it cannot fail to excite the admiration even of scholars who disagree with its major arguments and conclusions.--D. E. Fehrenbacher, American Historical Review