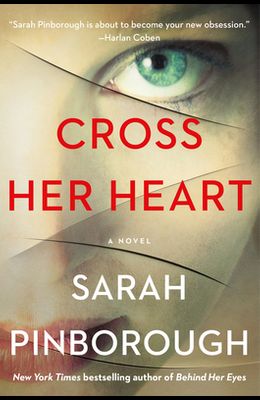 Sarah Pinborough is about to become your new obsession.--Harlan Coben Lisa is living a lie and everyone is about to find out. Lisa lives for her daughter Ava, her job and her best friend Marilyn. But when a handsome client shows an interest in her, Lisa starts daydreaming about sharing her life with him, too. Maybe she's ready now. Maybe she can trust again. Maybe it's time to let her terrifying secret past go. But when her daughter rescues a boy from drowning and their pictures are all over the news for everyone to see, Lisa's world explodes. As she finds everything she has built threatened, and not knowing who she can trust, it's up to Lisa to face her past in order to save what she holds dear. But someone has been pulling all their strings. And that someone is determined that both Lisa and Ava must suffer. Because long ago Lisa broke a promise. And some promises aren't meant to be broken.

From the Back Cover Promises aren't meant to be broken . . . FROM THE NEW YORK TIMES BESTSELLING AUTHOR OF BEHIND HER EYES COMES A CHILLING PSYCHOLOGICAL THRILLER ABOUT A DEDICATED SINGLE MOM, HER RESTLESS TEENAGE DAUGHTER, AND HER TROUBLED FRIENDS--ABOUT THE SECRETS THEY HIDE, AND THE PASTS THEY CAN'T ESCAPE Lisa lives a very quiet life. A single mother nearing forty, she values her privacy and devotes herself to raising her sixteen-year-old daughter, Ava. Wary of men, Lisa doesn't speak of her past or Ava's absent father. Her best friend and coworker, Marilyn, wishes she would open up more and maybe finally go on a date--especially with the sexy new client who's obviously keen--but maybe Marilyn shouldn't be handing out dating advice given her own problems. Ava, meanwhile, is getting tired of her overprotective mother. She wants to live like a normal teenager--chill with friends, go to swim practice, study for exams, have a boyfriend. Her mom would freak if she knew that Ava's already got someone special, someone exciting and mysterious, who makes her feel sophisticated--and wanted. Lisa has spent a long time looking over her shoulder, but lately she's been especially uneasy. Just when she starts to let her guard down, small things from the past begin to intrude upon her carefully constructed life, feeding her anxiety. As her world begins to unravel, Lisa knows that the only way she can protect herself and her daughter is to face her fears. Yet courage won't be enough. She'll need help from the only person she can trust--Marilyn. Between them they have to save Ava, and to do that, they have to be honest with each other. Truly honest. Marilyn did promise she'd do anything to help. But a long time ago, Lisa made a promise too. Then she broke her word. And that betrayal hasn't been forgotten--or forgiven. Now someone is going to make her pay for her sin. A captivating and hair-raising psychological thriller, Cross Her Heart is a masterful tale of obsession, intrigue, and suspense that will leave you reeling.