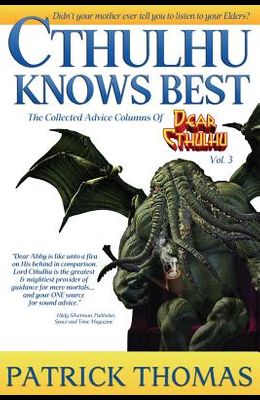 The third volume of the advice you've been afraid to ask for proves once and for all and beyond a shadow of a doubt that Cthulhu Knows Best Cthulhu will one day rise up to claim the Earth and its inhabitants as his own. The Great Old One has looked upon Humankind and found it lacking. Cthulhu has deemed it necessary to prepare Humankind for his coming Thus, Cthulhu now answers humanity's questions to help them better themselves. Dear Cthulhu, I am constantly being criticized by friends and even strangers for breastfeeding my son in public. They all try to tell me he's too old. I think it is up to the mother when she stops breastfeeding her kids. Besides, he just won't take the formula. I've tried and he doesn't like it. If it helps, my little one turned thirty-six last month. --Momma Manning the Milk Pumps Dear Milk, Traditionally when the child can open up the mother's shirt and help himself to a snack, it is time to cut them off And it is quite possible that your behavior is keeping him from meeting women his own age to play and procreate with. If you are interested in grandchildren, I suggest stopping the feeding immediately. But look at it this way. You have kept your mammaries going for almost four decades. Maintain that with a breast pump for a while longer and you may be able to feed your grandchildren as well.