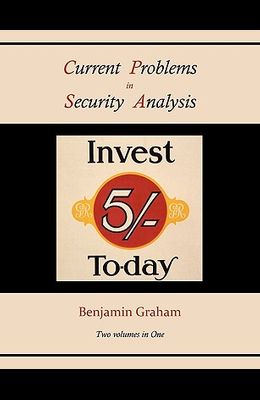 Current Problems in Security Analysis (Two volumes in One)

2010 Reprint of 1947 Edition. Two volumes in one.Benjamin Graham (1894 - 1976) was an American economist and professional investor. Graham is considered the first proponent of Value investing, an investment approach he began teaching at Columbia Business School in 1928 and subsequently refined with David Dodd through various editions of their famous book Security Analysis. Graham intended the lectures transcribed in Current Issues in Security Analysis as a way to update the 1940 revision of his classic work, Security Analysis. These lectures are from the series entitled Current Problems in Security Analysis that Mr. Graham presented at the New York Institute of Finance from September 1946 to February 1947. Published using a typewriter, these are the transcripts of ten lectures given by Graham. They communicate Graham's understanding of the main issues and perils of investing. The format is the teacher/student interaction, with Graham providing a formal lecture and later answering questions.