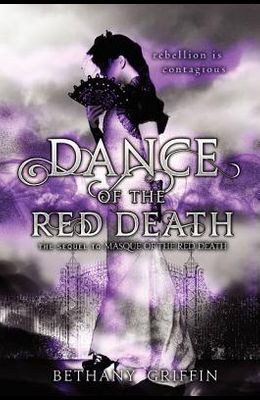 Dance of the Red Death

Book #2 in the Masque of the Red Death Series
by
Bethany Griffin
$3.78
Select Format

In this sequel to Masque of the Red Death, Araby's world is in shamblesNbetrayal, death, disease, and evil forces surround her. She has no one to trust. But she finds herself and discovers that she will fight for the people she loves, and for her city.

From the Back Cover Everything is on fire. Araby Worth's city is being torn apart by death, disease, and corrupt forces wanting to claim it for their own. She has lost her home. Her best friend is dying. Her mother has been kidnapped. The boy who made her feel something again has betrayed her. And her father may be a murderer. But Araby has found herself. Despite the death and destruction all around her, she will fight for herself, for her friends, for her city. Her rebellion will take her, finally, to the mad prince's palace, for the decadent--and sinister--masked ball. It could be a trap. It could be the end of them all. Or it could be the moment that Araby becomes the kind of hero she never dreamed she could be. The tragic, dark, and steamy conclusion to Bethany Griffin's Masque of the Red Death saga.

Masque of the Red Death Series In Order - By Bethany Griffin

Books similiar to Dance of the Red Death

List of All Editions of Dance of the Red Death