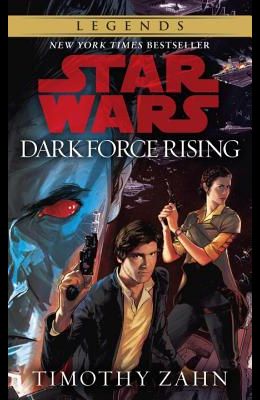 Book #2 in the Star Wars: The Thrawn Trilogy Series
by
Timothy Zahn

The #1 bestselling saga begun in Heir to the Empire continues. The dying Empire's most cunning warlord takes command of the remnants of the Imperial fleet and launches a massive campaign against the New Republic. Meanwhile, Han Solo and Lando Calrissian race to find proof of treason inside the Republic Council and a new Dark Jedi attempts to seduce Luke Skywalker to the Dark Side of the Force.

From the front Cover The dying Empire's most cunning and ruthless warlord--Grand Admiral Thrawn--has taken command of the remnants of the Imperial fleet and launched a massive campaign aimed at the New Republic's destruction. With the aid of unimaginable weapons long hidden away by the Emperor on a backwater planet, Thrawn plans to turn the tide of battle, overwhelm the New Republic, and impose his iron rule throughout the galaxy. Meanwhile, Han and Lando Calrissian race against time to find proof of treason inside the highest Republican Council--only to discover instead a ghostly fleet of warships that could bring doom to their friends and victory to their enemies. Yet most dangerous of all is a new Dark Jedi, risen from the ashes of a shrouded past, consumed by bitterness... and scheming to corrupt Luke Skywalker to the Dark Side.