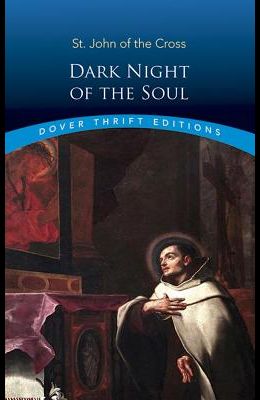 Dark Night of the Soul

by
St John of th Cross

The great Spanish mystic St. John of the Cross became a Carmelite monk in 1563 and helped St. Teresa of Avila to reform the Carmelite order -- enduring persecution and imprisonment for his efforts. Both in his writing and in his life, he demonstrated eloquently his love for God. His written thoughts on man's relationship with God were literacy endeavors that placed him on an intellectual and philosophical level with such great writers as St. Augustine and Thomas Aquinas. In this work -- a spiritual masterpiece and classic of Christian literature and mysticism -- he addresses several subjects, among them pride, avarice, envy, and other human imperfections. His discussion of the dark night of the spirit, which considers afflictions and pain suffered by the soul, is followed by an extended explanation of divine love and the soul's exultant union with God. This fine translation by E. Allison Peers is the most faithful that has appeared in any European language: it is, indeed, much more than a translation for Peers] added his own valuable historical and critically interpretive] notes. -- London Times .