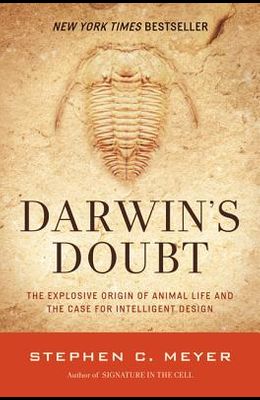 Darwin's Doubt: The Explosive Origin of Animal Life and the Case for Intelligent Design

The author of The Signature in the Cell now tackles the most controversial aspect of Charles Darwin's evolutionary theory and expands the scientific argument for intelligent design.

From the Back Cover The Evidence That Darwin Could Not Explain Charles Darwin knew there was a significant event in the history of life that his theory did not explain. In what is known today as the Cambrian explosion, many animals suddenly appeared in the fossil record 530 million years ago without apparent ancestors in earlier layers of rock. In Darwin's Doubt , Stephen C. Meyer tells the story of the mystery surrounding this explosion of animal life and makes a compelling case for the theory of intelligent design as the best explanation for the origin of the Cambrian animals and the biological information necessary to produce them. With a new epilogue responding to critics