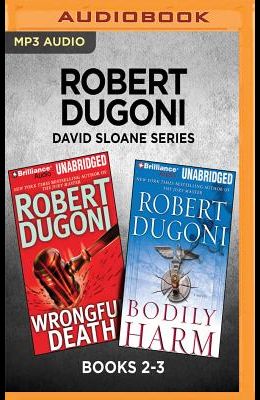 WRONGFUL DEATH Minutes after winning a $1.6 million wrongful-death verdict, attorney David Sloane confronts the one case that threatens to blemish his unbeaten record in the courtroom. Beverly Ford wants Sloane to sue the United States government and military in the mysterious death of her husband, James, a national guardsman killed in Iraq. While a decades-old military doctrine might make Ford's case impossible to win, Sloane is compelled to find justice for the widow and her four children in what is certain to become the biggest challenge of his career. Sloane calls on his friend, reclusive former CIA agent Charles Jenkins, to track down the other men serving with Ford the night he died. Alarmingly, two of the four who returned home alive didn't stay that way for long, and though the mission's wheelchairbound commander now works for a civilian contractor, he refuses to talk. The final soldier is also the most elusive, but he's their only shot at discovering the truth--if Sloane and Jenkins can keep him alive long enough to tell it. Sloane must uncover what really happened on that fatal mission, not only to bring justice to a family wronged but to keep himself and the people closest to him from becoming the next casualties.... BODILY HARM Bodily Harm opens with a big win for David Sloane and his new partner in a malpractice case centered on the death of a young child. But on the heels of this seeming victory, an unlikely character--toy designer Kyle Horgan--comes forward to tell Sloane that he's gotten it all wrong: Horgan's the one who's responsible for the little boy's death and possibly others--not the pediatrician Sloane has just proven guilty. Ordinarily, Sloane might have dismissed such a person as a crackpot, but something about this case has always troubled him--something that he couldn't quite pinpoint. When Sloane tries to follow up with Horgan, he finds the man's apartment ransacked by unknown perpetrators. Horgan has vanished without a trace. Together with his longtime investigative partner Charles Jenkins, Sloane re-examines his clients' son's death and digs deeper into Horgan's claims, forcing him to enter the billion-dollar, cutthroat toy industry. To get to the bottom of it all and find justice for the families harmed, Sloane must keep in check his overwhelming desire for revenge.