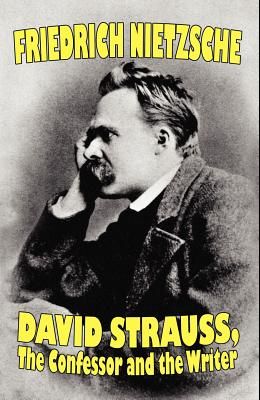 David Strauss, the Confessor and the Writer

Nietzsche harbored a fevered yearning to call false prophets to book and to reduce their fine axioms to absurdity. Accordingly, he planned a series of twenty-four pamphlets and decided to call them Unzeitgemasse Betrachtungen Untimely Meditations], which may be translated as Inopportune Speculations, or more clearly, Essays in Sham-Smashing. In looking about for a head to smash in essay number one, his eye, naturally enough, alighted upon that of David Strauss, the favorite philosopher and fashionable iconoclast of the day. Strauss had been a preacher but had renounced the cloth and set up shop as a critic of Christianity. He had labored with good intentions, no doubt, but the net result of all his smug agnosticism was that his disciples were as self-satisfied, bigoted and prejudiced in the garb of agnostics as they had been before as Christians. Nietzsche's clear eye saw this and in the first of his little pamphlets, David Strauss, der Bekenner and der Schriftsteller (David Strauss, the Confessor and the Writer), he bore down upon Strauss' bourgeoise pseudo-skepticism most savagely.