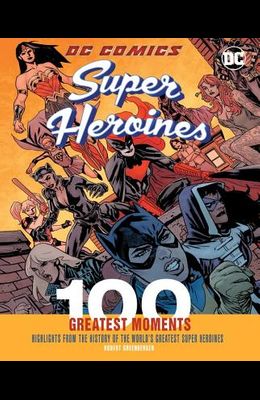 From Batgirl to Wonder Woman, all of the greatest female characters of the DC Comics universe are paid homage in alphabetical order in this epic tome. DC Comics Super Heroines: 100 Greatest Moments . is broken down, moment by moment, to give readers a better understanding to pivotal points in the development of their favorite heroines as well as the wide scope of the DC Comics extended universe. Now in a larger size to give you an even closer look at your favorite heroines. The second installment of Chartwell Books' 100 Greatest Moments of DC Comics series highlights the feats of emotional strength and bravery displayed by the powerful women of DC Comics. Compiled from a slew of sources across the wider internet, favorite moments new and old are shown. Rarely printed art, variant covers , and valuable insight into the goings-on of the comic book world are all expertly told by seasoned comic book fan and writer , Robert Greenberger . Fans will love this overview of 100 notable scenes where women showed just how tough they are . High quality panels are pulled from the silver and bronze age up to the present. Favorites like Wonder Woman, Batgirl, Supergirl, Black Canary, Zatanna, and many more make an appearance in this volume. Here's a sneak-peak into the world of women in comics : Oracle forming the Birds of Prey Saving the Statue of Liberty Raven Vs Triton Catwoman Protecting her Partners JLA Chairperson, Black Canary Dawn Granger Inheriting the Power of the Dove Power Girl and the Justice Society of America Supergirl's Ultimate Sacrifice Carrie Kelley Becoming Robin Batwoman and Don't Ask/Don't Tell Bask in the grit, grace, and glory of your favorite heroines with DC Comics Super Heroines: 100 Greatest Moments . The 100 Greatest Moments of DC Comics series collects the greatest, most memorable moments of your favorite comic book characters in gorgeous volumes that highlight both individual characters and groups. From superheroes to super-villains, each book in this collection covers some of the greatest DC comic book characters. No comic book nerd's collection is complete without the 100 Greatest Moments of DC Comics books of their favorite characters.