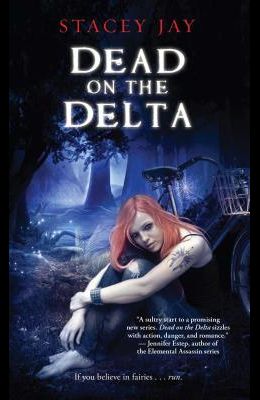 Dead on the Delta

Once upon a time, fairies were the stuff of bedtime stories and sweet dreams. Then came the mutations, and the dre-ams became nightmares. Mosquito-size fairies now indulge their taste for human blood--and for most humans, a fairy bite means insanity or death. Luckily, Annabelle Lee isn't most humans. The hard-drinking, smart-mouthed, bicycle-riding redhead is immune to fairy venom, and able to do the dirty work most humans can't. Including helping law enforcement-- and Cane Cooper, the bayou's sexiest detective--collect evidence when a body is discovered outside the fairy-proof barricades of her Louisiana town. But Annabelle isn't equipped to deal with the murder of a sixyear- old girl or a former lover-turned-FBI snob taking an interest in the case. Suddenly her already bumpy relationship with Cane turns even rockier, and even the most trust-worthy friends become suspects. Annabelle's life is imploding: between relationship drama, a heartbreaking murder investigation, Breeze-crazed drug runners, and a few too many rum and Cokes, Annabelle is a woman on the run--from her past, toward her future, and into the arms of a darkness waiting just for her. . . . A sultry start to a promising new series. Dead on the Delta sizzles with action, danger, and romance. -- Jennifer Estep, USA Today bestselling author of the Elemental Assassin series

List of All Editions of Dead on the Delta