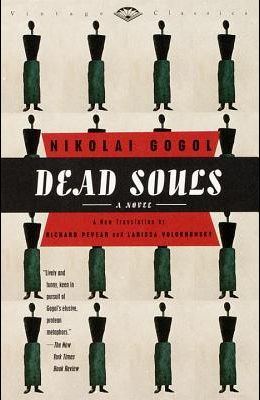 by
Nikolai Gogol and Richard Pevear

The acclaimed translators of The Brothers Karamazov and Crime and Punishment now turn their attention to Nikolai Gogol's supremely realistic portrait of provincial Russian life. In this surreally funny classic of Russian literature, Gogol's wily antihero, Chichikov, is in the business of buying up dead souls--deceased serfs who exist only on paper.

From the front Cover Since its publication in 1842, Dead Souls has been celebrated as a supremely realistic portrait of provincial Russian life and as a splendidly exaggerated tale; as a paean to the Russian spirit and as a remorseless satire of imperial Russian venality, vulgarity, and pomp. As Gogol's wily antihero, Chichikov, combs the back country wheeling and dealing for dead souls--deceased serfs who still represent money to anyone sharp enough to trade in them--we are introduced to a Dickensian cast of peasants, landowners, and conniving petty officials, few of whom can resist the seductive illogic of Chichikov's proposition. This lively, idiomatic English version by the award-winning translators Richard Pevear and Larissa Volokhonsky makes accessible the full extent of the novel's lyricism, sulphurous humor, and delight in human oddity and error.