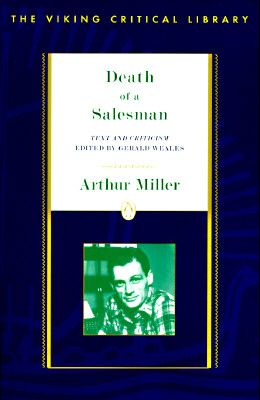 The Pulitzer Prize-winning tragedy of a salesman's deferred American dream, presented here with enlightening commentary and criticism Willy Loman, the protagonist of Death of a Salesman , has spent his life following the American way, living out his belief in salesmanship as a way to reinvent himself. But somehow the riches and respect he covets have eluded him. At age 63, he searches for the moment his life took a wrong turn, the moment of betrayal that undermined his relationship with his wife and destroyed his relationship with Biff, the son in whom he invested his faith. Willy lives in a fragile world of elaborate excuses and daydreams, conflating past and present in a desperate attempt to make sense of himself and of a world that once promised so much. Since it was first performed in 1949, Arthur Miller's Pulitzer Prize-winning drama about the tragic shortcomings of an American dreamer has been recognized as a milestone of the theater. This Viking Critical Library edition of Death of a Salesman contains the complete text of the play, typescript facsimiles, and extensive critical and contextual material including: Conflicting reviews about its opening night by Robert Garland, Harold Clurman, Eleanor Clark, and others Five articles by Miller on his play, including Tragedy and the Common Man and his Introduction to Collected Plays Critical essays by John Gassner, Ivor Brown, Joseph A. Hynes, and others General essays on Miller by William Weigand, Allan Seager, and others Analogous works by Eudora Welty, Walter D. Moody, Tennessee Williams, and Irwin Shaw The stage designer's account, presented in selections from Designing for the Theatre by Jo Mielziner An in-depth introduction by the editor, a chronology, a list of topics for discussion and papers, and a bibliography