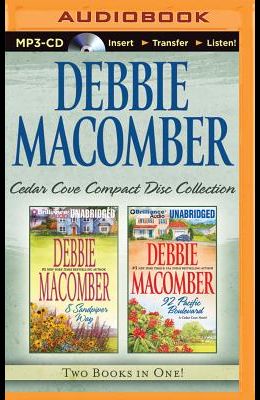 Two of Debbie Macomber's Cedar Cove novels in a single collection 8 Sandpiper Way Dear Listener, I'm pretty shocked by something I've just heard. Emily Flemming is afraid that her husband, Dave, might be having an affair. She apparently found an earring in his pocket--and it wasn't hers. And she says he's been coming home late and acting secretive. Not only that, some jewelry was recently stolen from an old woman, and Dave (in his capacity as pastor) used to visit her a lot.... This is all so hard to believe Dave's a good pastor and a good man. He and Emily appear to have the perfect life, with their children, Matthew and Mark, and their lovely home at 8 Sandpiper Way. But I guess things aren't always as they seem. Listener, I'd love to hear what you think, and so does Emily. I have some personal news, too--it's turning out to be a challenging year. But there are also some interesting updates about our friends in Cedar Cove. Like Sheriff Troy Davis, to mention one. Guess what? His long-ago love, Faith Beckwith, has just moved back here Hope you'll join Emily and me for a cup of tea soon. Olivia Lockhart-Griffin Cedar Cove, Washington 92 Pacific Boulevard Dear Listener, I'm sorry to say that our good sheriff, Troy Davis, has suffered a disappointment in love. He was hoping to marry his onetime girlfriend, Faith Beckwith, who recently moved back to town. Well, the latest is that Faith ended the relationship last month, even though both of them are widowed and available. According to Troy, there were a few misunderstandings between them--some inadvertently caused, it seems, by his daughter, Megan. Troy's got plenty to keep him occupied, though--like the unidentified remains found in a cave outside town. And the break-ins at 204 Rosewood Lane, the house Faith just happens to be renting from Grace Harding.... All of that's a distraction from what's happening in my life. I'm going through chemo right now, and I'm so grateful for my husband, Jack, my family, and my friends, who give me the strength and support I need to beat this. But beat it I will I'd suggest meeting at Troy's place, 92 Pacific Boulevard, so we can all talk, but the Pancake Palace is probably a better choice if you want a decent cup of coffee Olivia Lockhart-Griffin Cedar Cove, Washington