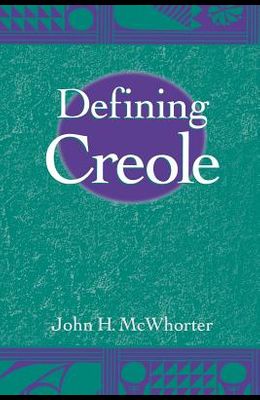 A conventional wisdom among creolists is that creole is a sociohistorical term only: that creole languages share a particular history entailing adults rapidly acquiring a language usually under conditions of subordination, but that structurally they are indistinguishable from other languages. The articles by John H. McWhorter collected in this volume demonstrate that this is in fact untrue. Creole languages, while complex and nuanced as all human languages are, are delineable from older languages as the result of their having come into existence only a few centuries ago. Then adults learn a language under untutored conditions, they abbreviate its structure, focusing upon features vital to communication and shaving away most of the features useless to communication that bedevil those acquiring the language non-natively. When they utilize their rendition of the language consistently enough to create a brand-new one, this new creation naturally evinces evidence of its youth: specifically, a much lower degree of the random accretions typical in older languages, which only develop over vast periods of time. The articles constitute a case for this thesis based on both broad, cross-creole ranges of data and focused expositions referring to single creole languages. The book presents a general case for a theory of language contact and creolization in which not only transfer from source languages but also structural reduction plays a central role, based on facts whose marginality of address in creole studies has arisen from issues sociopolitical as well as scientific. For several decades the very definition of the term creole has been elusive even among creole specialists. This book attempts to forge a path beyond the inter- and intra-disciplinary misunderstandings and stalemates that have resulted from this, and to demonstrate the place that creoles might occupy in other linguistic subfields, including typology, language contact, and syntactic theory.