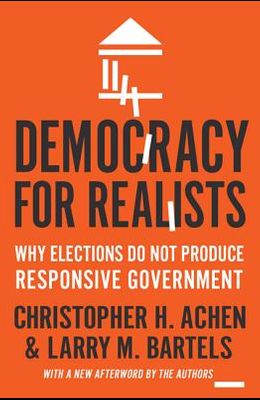 Democracy for Realists: Why Elections Do Not Produce Responsive Government

Why our belief in government by the people is unrealistic--and what we can do about it Democracy for Realists assails the romantic folk-theory at the heart of contemporary thinking about democratic politics and government, and offers a provocative alternative view grounded in the actual human nature of democratic citizens. Christopher Achen and Larry Bartels deploy a wealth of social-scientific evidence, including ingenious original analyses of topics ranging from abortion politics and budget deficits to the Great Depression and shark attacks, to show that the familiar ideal of thoughtful citizens steering the ship of state from the voting booth is fundamentally misguided. They demonstrate that voters--even those who are well informed and politically engaged--mostly choose parties and candidates on the basis of social identities and partisan loyalties, not political issues. They also show that voters adjust their policy views and even their perceptions of basic matters of fact to match those loyalties. When parties are roughly evenly matched, elections often turn on irrelevant or misleading considerations such as economic spurts or downturns beyond the incumbents' control; the outcomes are essentially random. Thus, voters do not control the course of public policy, even indirectly. Achen and Bartels argue that democratic theory needs to be founded on identity groups and political parties, not on the preferences of individual voters. Now with new analysis of the 2016 elections, Democracy for Realists provides a powerful challenge to conventional thinking, pointing the way toward a fundamentally different understanding of the realities and potential of democratic government.

From the Back Cover Two of America's smartest political scientists bid fair to transform our understanding of democracy. In our season of democratic discontent, this unsettling book could hardly be more timely. Must-reading for anyone interested in democratic theory and American politics. --Robert D. Putnam, author of Bowling Alone: The Collapse and Revival of American Community and Our Kids: The American Dream in Crisis Democracy for Realists is the single most important treatise on American democracy published in several decades. Achen and Bartels challenge just about every existing school of thought about electoral politics, policymaking, and government performance. They do not conclude with a counsel of despair for the future of American democracy, but they give no quarter to any notion that responsive government is possible without a more responsible citizenry. --John DiIulio, University of Pennsylvania It is impossible to overstate the significance of this magnum opus on democracy and democratic theory. Achen and Bartels lay waste to the folk theory of democracy through dazzling logic and rigorous empirical analysis. Democracy for Realists will become an instant classic, shaping our thinking on democracy for decades to come. --Thomas E. Mann, Brookings Institution and the University of California, Berkeley It is common in the history of science for scholars to bark up the wrong trees. Achen and Bartels make a strong case that spatial models of mass elections and the theory of retrospective voting are examples of wrong trees. Scholars, they argue, should now reorient toward group attachments as the foundation of democratic politics. All in all, this is a broad, deeply thoughtful, and courageous book. --John Zaller, University of California, Los Angeles Not since the work of Walter Lippmann, David Truman, Philip Converse, and Robert Dahl have empirical democratic theorists made us think so deeply. Achen and Bartels demolish the folk theory of democracy in which politicians obtain mandates from rational voters. Instead, they propose an exciting new agenda that wrestles with the real democratic process in which political parties and interest groups fashion public policies to appeal to people's basic identities. --Henry E. Brady, coauthor of The Unheavenly Chorus: Unequal Political Voice and the Broken Promise of American Democracy The best book to understand the 2016 campaign. --Matthew Yglesias The most clear-eyed take on American democracy I have read in a long time. --Daniel W. Drezner, Tufts University Democracy for Realists has the potential to become a classic. It raises questions that every democratic theorist and practitioner should take seriously. It is certain to provoke significant discussion. --Jane Mansbridge, Harvard University Democracy for Realists is a terrific book. It takes on big questions, is brimming with smart analysis and crisp argumentation, and the writing is elegant. There is pleasure and provocation on nearly every page. Achen and Bartels have made a major contribution to modern social science. --Donald R. Kinder, coauthor of The End of Race? Obama, 2008, and Racial Politics in America