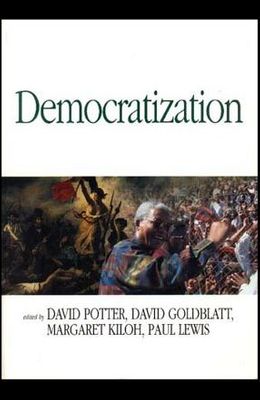 Democratization: Essays on Ethnics and Politics

by
David Potter and David Goldblatt and Margaret Kiloh

In 1760 no polity in the world was democratic in any way we would now recognize. In 1995 there were democratic states on every continent and in every region. The struggle to create, sustain, and entrench democratic political systems is one of the central narratives of modernity. Democratization is the first textbook comprehensively to survey, explore and engage with this story. In Part I, the introduction to the book as a whole, an overview and elaboration is offered of the key explanatory models of democratization; this section also refines the description of a regime's democratic status and explores the models and strategies of comparative analysis used in the book. While each of the subsequent twenty chapters can stand on their own, they have all been framed by a shared engagement with and discussion of the dynamics of democratization set out here. Part II surveys the course of democratization in the West from 1760 to 1989, examining both the early breakthroughs of the French and American Revolutions and the inter-war crisis of European democracy. The post-war era is covered by discussions of the impact of World War II, the democratic revolutions in Southern Europe and the struggle of the American Civil Rights movement. Part III examines the experience of Latin America and Asia. The Latin American case is covered in two chapters stretching from the 1930's to the 1990's. In the Asia section the comparative trajectories of Asia's two giants - China and India - are contrasted with the experience of East Asia's original tigers (Taiwan and South Korea) and more recent industrializing states (Indonesia, the Philippines, Malaysia). In Part IV the relative weakness of democratization in Africa and the Middle East is interrogated. Surveys of the Middle East and sub-Saharan Africa are complemented by individual case studies (Israel-Palestine and South Africa) and a synoptic examination of the relationship between Islamic culture, society and democracy. In Part V, the democratic revolutions of 1989 and their aftermath are examined in chapters on Eastern Europe and Russia. The enmeshment of these processes of democratization with nationalist struggles are highlighted in a study of former Czechoslovakia and Yugoslavia while the particular course of the remaining socialist states is examined in a chapter on Vietnam. Finally, the conclusion both reviews the regional variations in democratization and considers the pressing question of how democracies once created can be sustained. Democratization will provide students and teachers with an invaluable and engaging resource for examining the complex fate of democratic politics across the world.

From the Back Cover This is the first textbook comprehensively to explore and explain the story of democratization in the modern world. In Part I, democratization is defined and the theorical approaches, explanatory factors and comparative methods used throughout the book are introduced. Each of the subsequent twenty chapters can stand on its own, but all have been framed by the explanatory framework set out here. Part II surveys the course of democratization in Europe and the USA from 1760 to 1989. It examines the early breakthrough of the French and American revolutions, the inter-war crises of European democracy, the impact of the Second World War on European polities and the struggle of the Civil Rights Movement in the USA. Latin America and Asia are considered in Part III. Two chapters address the distinctive story of democratization in Latin America generally from the 1930s to the 1990s. The Asia chapters explain the political trajectories of India, China, South Korea, Taiwan, Malaysia, Indonesia and the Philippines. The relative weakness of democratization in sub-Saharan Africa and the Middle East is interrogated in Part IV. Explanations of the general patterns of democratization in the two regions are complemented by individual case studies of South Africa and Israel. There is also a synoptic consideration of the relationship between Islam and democracy. Part V tackles the democratic revolutions of 1989 and their aftermath in Eastern Europe, Russia and other states. The enmeshment of these processes of democratization with nationalist struggles is highligted in a study of Czechoslovkia and Yugoslavia, while the particular course of the remaining socialist states is examined in a chapter on Vietnam. Finally, the conclusion both reviews the regional variations of democratization and considers the pressing question of how democracies onece created can be sustained.