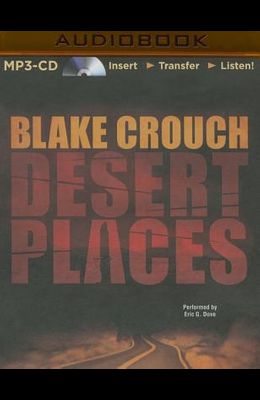 Desert Places: A Novel of Terror

The first installment in the Andrew Z. Thomas Series and a prequel to Crouch's and Konrath's thriller Stirred ... Greetings. There is a body buried on your property, covered in your blood. The unfortunate young lady's name is Rita Jones. In her jeans pocket you'll find a slip of paper with a phone number on it. Call that number. If I have not heard from you by 8:00 p.m., the police will receive an anonymous call. I'll tell them where Rita Jones is buried on your property, how you killed her, and where the murder weapon can be found in your house. (I do believe a paring knife is missing from your kitchen.) I strongly advise against going to the police, as I am always watching you. Andrew Z. Thomas is a successful writer of suspense thrillers, living the dream at his lake house in the piedmont of North Carolina. One afternoon in late spring, he receives a bizarre letter that eventually threatens his career, his sanity, and the lives of everyone he loves. A murderer is designing his future, and for the life of him, Andrew can't get away.