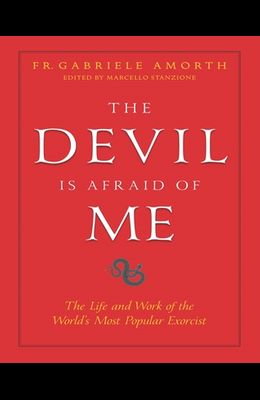 Devil Is Afraid of Me

by
Gabriele Amorth and Marcello Stanzione

From the front Cover We can do nothing against you because you are too protected! So declared a frustrated host of devils to Father Gabriele Amorth, the priest exorcist in Rome who spent thirty years battling the Devil and his minions by performing more than a hundred thousand exorcisms. At the same time, he deftly used modern media to awaken our disbelieving modern culture -- and even the Church -- to the reality of the Devil and his nefarious actions at all times and everywhere. In these eye-opening pages, angelologist Father Marcello Stanzione tells the story of the life of Father Amorth, and includes, as well, not merely many anecdotes about his exciting life but also long excerpts from various interviews Father gave to the media, religious and secular. By means of those interviews, you'll learn firsthand from Father Amorth many forgotten truths about the Devil and his ways, and in particular the devious methods he has adopted in recent years to corrupt believers and unbelievers alike. It's simple to spot them, argues Father Amorth here, and simple even to resist them. We can do nothing against you because you are too protected! said the devils that Father Amorth battled. Let Father Amorth teach you in these pages how you can be protected too!