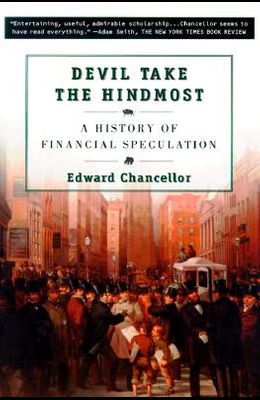 Devil Take the Hindmost: A History of Financial Speculation

Drawing colorfully on the words of such speculators as Sir Isaac Newton, Daniel Defoe, Ivan Boesky, and Hillary Rodham Clinton, Chancellor examines the nature of speculation--from medieval Europe to the Tulip mania of the 1630s to today's Internet stock craze.

From the Back Cover Devil Take the Hindmost is a lively, original, and challenging history of stock market speculation from the seventeenth century to the present day. Edward Chancellor traces the origins of the speculative spirit back to ancient Rome and chronicles its revival in the modern world: from the tulip scandal of 1630s Holland, to stockjobbing in London's Exchange Alley (where wine sold at auction by an inch of a candle), to the infamous South Sea Bubble of 1719, which prompted investor Sir Isaac Newton to comment, I can calculate the motion of heavenly bodies, but not the madness of people. Here are brokers underwriting risks that included highway robbery and the assurance of female chastity; credit notes and lottery tickets circulating as money; wise and unwise investors from Alexander Pope and Benjamin Disraeli to Ivan Boesky and Hillary Rodham Clinton. From the Gilded Age to the Roaring Twenties, from the railway mania of nineteenth-century America to the crash of 1929, from junk bonds and the Japanese bubble economy to day-traders of the Information Era, Devil Take the Hindmost tells a fascinating story of human dreams and folly through the ages.

Books similiar to Devil Take the Hindmost: A History of Financial Speculation

List of All Editions of Devil Take the Hindmost: A History of Financial Speculation