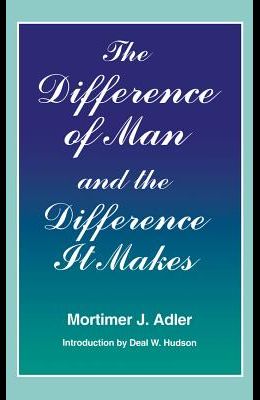 In this classic work, Adler explores how man differs from all other things in the universe, bringing to bear both philosophical insight and informed scientific hypotheses concerning the biological and behavioral characteristics of mainkind. Rapid advances in science and technology and the abstract concepts of that influence on man and human value systems are lucidly outlined by Adler, as he touches on the effect of industrialization, and the clash of cultures and value systems brought about by increased communication between previously isolated groups of people. Among the other problems this study addresses are the scientific achievements in biology and physics which have raised fundamental questions about humanity's essential nature, especially the discoveries in the bilogical relatedness of all living things. Thrown into high relief is humanity's struggle to determine its unique status in the natual world and its value in the world it has created. Ultimately, Adler's work develops an approach to the separation between scientific and philosophical questions which stands as a model of thought on philosophical considerations of new scientific discoveries and its consequences for the human person.

From the Back Cover This book was first published in 1967. It dealt with what I recognized to be a mixed question that could not be satisfactorily answered by philosophical thought alone, or by the empirical sciences. Philosophy posed the question about the specific nature of man and the place of Homo sapiens in the order of nature. Do human beings differ from the higher mammals only in degree or in kind; and if in kind, is the difference radical or only superficial?