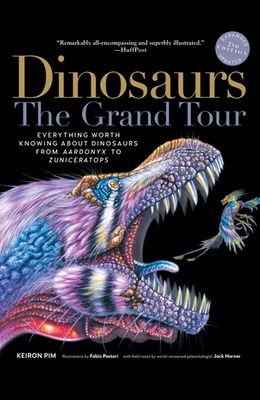 by
Keiron Pim and Jack Horner and Fabio Pastori

We live in a golden age of archaeological discovery--the perfect time to dig into the spectacular world of dinosaurs. We know more about dinosaurs than ever before (for starters, they were more feathered and furry than we'd thought), plus we're constantly discovering new species--on average, a new dinosaur is uncovered once a week. Dinosaurs--The Grand Tour has always included everything worth knowing about more than 300 dinosaurs from A to Z; in this newly revised, expanded, and updated 2nd edition, you'll find all the latest science and species you need to know about now, including: Patagotitan mayorum-- an Argentine titanosaur and the new title holder of biggest dinosaur ever known Nanuqsaurus hoglundi --an Alaskan species whose name means polar bear lizard New evidence that, contrary to what you saw on Jurassic Park , T. rex couldn't run The important discoveries and gory details touch on topics from geology, anatomy, evolution, and astronomy to Native American and Chinese myth. Illustrations on virtually every page, true to the latest findings, bring these prehistoric creatures to life in all their razor-sharp, long-necked, furry, feathered glory.