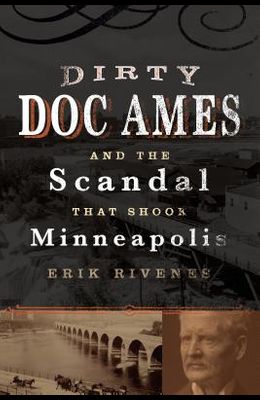 Dirty Doc Ames and the Scandal That Shook Minneapolis

The story of Albert Alonzo Doc Ames is perhaps the greatest political scandal in Minnesota history. As mayor of Minneapolis, Ames exposed the city to national humiliation-and helped jump-start an era of reform. At the turn of the twentieth century, Minneapolis was moving away from a time of political rings, frontier justice, and old boys' clubs to a more civic-minded way of governing. But in 1901, the affable, degenerate Doc Ames, a former Minneapolis mayor well past his political prime, duped his way back into the office. Ames appointed his brother as chief of police, and together they assembled a rogues' gallery of thieves to squeeze as much money out of the city as quickly as they could. Under Ames's leadership, criminals walked beats wearing policeman's uniforms. City detectives robbed prominent citizens. Police maintained arrangements with madams and saloonkeepers, extracting pay for the privilege of openly ignoring the law. With a card game gone bad, and a complaint to a newspaper, it all fell apart. Ames fled Minneapolis in mid-term to avoid prosecution. And at Doc Ames's spectacular downfall, the citizens of Minneapolis finally woke up and took their city back.