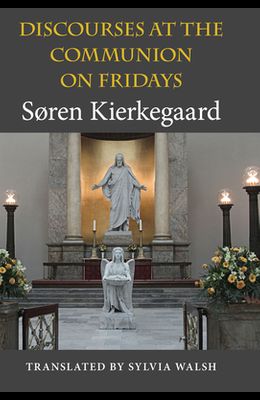 Discourses at the Communion on Fridays

by
Soren Kierkegaard and Sylvia Walsh

S ren Kierkegaard's 13 communion discourses constitute a distinct genre among the various forms of religious writing composed by Kierkegaard. Originally published at different times and places, Kierkegaard himself believed that these discourses served as a unifying element in his work and were crucial for understanding his religious thought and philosophy as a whole. Written in an intensely personal liturgical context, the communion discourses prepare the reader for participation in this rite by emphasizing the appropriate posture for forgiveness of sins and confession.