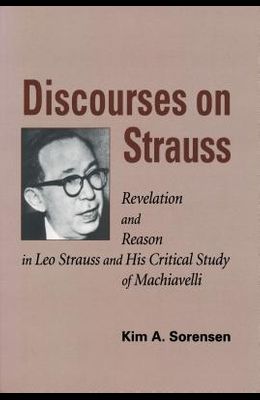 Discourses on Strauss: Revelation and Reason in Leo Strauss and His Critical Study of Machiavelli

by
Kim a Sorensen

This is an excellent work that will lay just claim to being a major treatment of the most significant themes in the work of Leo Strauss. Sorensen's persuasive and original linking of Strauss's critical study of Machiavelli with Strauss on reason/revelation illuminates a new dimension of the philosopher's thought. --Walter Nicgorski, University of Notre Dame Leo Strauss has perhaps been more cited--and alternately vilified or revered--in the last ten years than during the productive years of his scholarly life. He has been blamed (or credited) for providing the intellectual underpinnings of a generation of neoconservatives in political philosophy and foreign policy. But though he may be cast as a conservative thinker who critiques modernity, to interpret him exclusively in this light is to reduce him in ways that his self-definition, as a political theorist open to both religion and philosophy, does not justify. Kim A. Sorensen clearly lays out the debate surrounding Strauss by reviewing his published work and legacy since his death in 1973. He then turns to a key distinction in Strauss's thought--between revelation and reason, or religion and philosophy--and maintains that Strauss used their mutual opposition to modernity as a central theme in his oeuvre. For Sorensen, Strauss considered revelation and reason both as fundamentally different worldviews and as alternate ways of understanding the good life. Sorensen explores Strauss's views on the revelation/reason distinction through a close examination of the final chapter in Strauss's Thoughts on Machiavelli. Here Strauss weighs Machiavelli's critique of religion in general and Christianity in particular, and Machiavelli's departure from the classical tradition of political philosophy dating from Socrates, Plato, and Aristotle. For Strauss, the crisis of our time has its point of origin in Machiavelli's rejection of both biblical and classical morality as guides to the efficacy of political virtue. For Strauss, Sorensen claims, a recovery of the ancient virtues of classical political philosophy is essential. Sorensen also shows that while Strauss is accepting of reason, he is also open to revelation. In the end, he is a philosopher both of Athens and of Jerusalem.