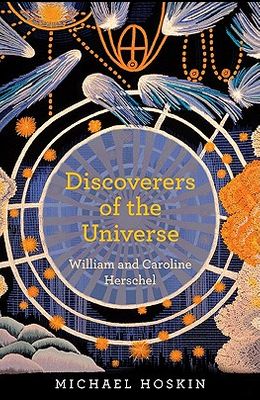 Discoverers of the Universe: William and Caroline Herschel

Discoverers of the Universe tells the gripping story of William Herschel, the brilliant, fiercely ambitious, emotionally complex musician and composer who became court astronomer to Britain's King George III, and of William's sister, Caroline, who assisted him in his observations of the night sky and became an accomplished astronomer in her own right. Together, they transformed our view of the universe from the unchanging, mechanical creation of Newton's clockmaker god to the ever-evolving, incredibly dynamic cosmos that it truly is. William was in his forties when his amateur observations using a homemade telescope led to his discovery of Uranus, and an invitation to King George's court. He coined the term asteroid, discovered infrared radiation, was the first to realize that our solar system is moving through space, discovered 2,500 nebulae that form the basis of the catalog astronomers use today, and was unrivalled as a telescope builder. Caroline shared William's passion for astronomy, recording his observations during night watches and organizing his papers for publication. She was the first salaried woman astronomer in history, a pioneer who herself discovered nine comets and became a role model for women in the sciences. Written by the world's premier expert on the Herschels, Discoverers of the Universe traces William and Caroline's many extraordinary contributions to astronomy, shedding new light on their productive but complicated relationship, and setting their scientific achievements in the context of their personal struggles, larger-than-life ambitions, bitter disappointments, and astonishing triumphs.

From the Back Cover The understanding of the cosmos as a whole has been profoundly influenced by the early work carried out by William Herschel with the assistance of his sister Caroline. Michael Hoskin brings out so very well in this book the many incidents and stories that establish how this was achieved, while placing them within the broader context of the astronomical establishment and aristocracy during the late eighteenth and early nineteenth centuries. --John Herschel-Shorland Nobody is better qualified than Michael Hoskin to assess the crucial role of the Herschels in transforming our cosmic perspective. He clearly conveys their extraordinary energy and commitment, and sets their great achievements in the context of their lives and their era. His elegant writing ensures that this book can be enjoyed even by those with no background in astronomy. --Martin Rees, Astronomer Royal Hoskin's keen observations provide exceptional resolution of the binary pair, William and Caroline Herschel. Transforming himself from a stargazing musician into the world's best astronomer, William also paved the path for his remarkable sister to become an astronomer in her own right. Together, they revolutionized astronomy itself, to reveal the structure and evolution of the universe. Hoskin is a meticulous and thoughtful guide to the lives and achievements of these extraordinary siblings. --Robert P. Kirshner, author of The Extravagant Universe The Herschel clan of Hanover produced a whole family of perennially split personalities, divided between Germany and England, music and astronomy, personal ambitions and family responsibility. Hoskin succeeds marvelously in conveying what made the Herschels click, individually and collectively, masterfully interweaving scientific excitement, personal crises, local color, and social mores in a vividly written, beautifully illustrated double biography. Even King George III comes off as a sympathetic character. --Ingrid D. Rowland, author of Giordano Bruno: Philosopher / Heretic A wonderfully detailed picture of the famous astronomer William Herschel and his family, illustrating the crucial roles of his sister Caroline in his observation program, of his brother Alex in the construction of his telescopes, and of his son John in completing his survey of nebulae. --Michael Rowan-Robinson, Imperial College London Michael Hoskin is a storyteller of science, here relating the fascinating story of the unlikely pair, brother and sister, who pioneered our modern understanding of the larger universe. William Herschel's discovery of Uranus and mapping of nebulae are widely known while Caroline Herschel's collaboration and her independent discovery of comets deserve to be more widely known. Here are their lives, and their extended family's lives, well told and well illustrated. --Jay M. Pasachoff, Williams College Discoverers of the Universe is full of fascinating information that has never before seen the light of day. No other account comes close to the richness of detail found in this book, which will become the definitive reference source on the Herschels. Hoskin is exactly the right person to write such a biography. --Owen Gingerich, author of God's Universe