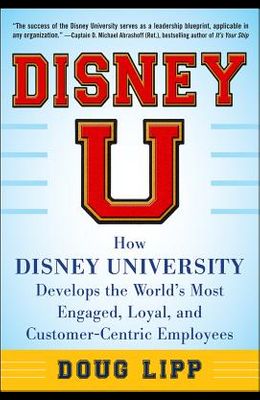 Disney U: How Disney University Develops the World's Most Engaged, Loyal, and Customer-Centric Employees

With a Foreword by Jim Cora, former Chairman of Disneyland International A leadership blueprint, applicable in any organization. -- Captain D. Michael Abrashoff, U.S. Navy (Ret.), and author of It's Your Ship When I first arrived at The Walt Disney Company, I was surprised to find I had to go back to school--at Disney University There, I learned the fundamentals of guest service that consistently gave Disney a tremendous advantage in the marketplace. Now, anyone can know these secrets of success thanks to Doug Lipp's informative book. No matter what your business, the lessons taught at DisneyUniversity will prove invaluable. -- Michael Eisner, Former CEO and Chairman, The Walt Disney Company When it comes to world-class employees, few organizations rival Disney. Famous for their friendliness, knowledge, passion, and superior customer service, Disney's employees have been fueling the iconic brand's wild success for more than 50 years. How has Disney succeeded in maintaining such a powerful workforce for so many years? Why are so many corporations and executives drawn to study how Disney continues to exemplify service and leadership standards? The Disney University, founded by Van France, trains the supporting cast that helps create the world-famous Disney Magic. Now, for the first time, the secrets of this exemplary institution are revealed. In Disney U , Doug Lipp examines how Van perpetuated Walt Disney's timeless company values and leadership lessons, creating a training and development dynasty. It contains never-before-told stories from numerous Disney legends. These pioneers share behind-the-scenes success stories of how they helped bring Walt Disney's dream to life. Disney U reveals the heart of the Disney culture and describes the company's values and operational philosophies that support the iconic brand. Doug Lipp lays out 13 timeless lessons Disney has used to drive profits and growth worldwide for more than half a century. To this day, the Disney University continues to turn out some of the most engaged, loyal, and customer-centered employees the business world has ever seen. Using the lessons outlined in Disney U will set your organization on a path of sustained success. PRAISE FOR Disney U I highly recommend Disney U to anyone interested in building an enduring market presence and brand. -- Stephen Cannon, President and Chief Executive Officer, Mercedes-Benz USA Lipp's narratives reveal how Van and other Disney visionaries set the stage for a world-class organization by skillfully balancing both 'people' and 'technology.' -- Debi Aubee, Vice President of Sales, Bose Corporation Every leader should have the equivalent of a Van France at his or her side. Thanks to Doug Lipp, we can now tap into the brilliance of a man who helped Walt createThe Happiest Place on Earth. -- David Overton, Founder and Chief Executive Officer, The Cheesecake Factory How does Disney University create such enthusiastic, loyal, and customer-centered employees, year after year? Now, for the first time, Doug Lipp takes us on a journey backstage to answer this pivotal question. -- John G. Veres III, Ph.D., Chancellor, Auburn University at Montgomery Doug Lipp shares terrific stories about Disney that underscore the importance of creating an organizational culture with an unwavering dedication to superlativeservice and exceptional quality, both for employees and customers. He then takes it a step further by explaining how to bring these values to life for your organization. -- Christine A. Morena, Executive Vice President of Human Resources, Saks Incorporated

Frequently Asked Questions About Disney U: How Disney University Develops the World's Most Engaged, Loyal, and Customer-Centric Employees

Books like Disney U: How Disney University Develops the World's Most Engaged, Loyal, and Customer-Centric Employees

0
|   0  reviews
Did you read Disney U: How Disney University Develops the World's Most Engaged, Loyal, and Customer-Centric Employees? Please provide your feedback and rating to help other readers.
Write Review

List of All Editions of Disney U: How Disney University Develops the World's Most Engaged, Loyal, and Customer-Centric Employees