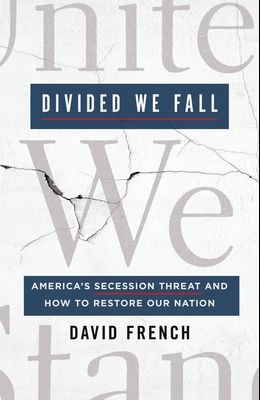 Divided We Fall: America's Secession Threat and How to Restore Our Nation

David French examines the depths of the American ideological divide, diagnoses its core causes, and provides a hopeful path forward. Polarization. Tribalization. Division. Some look at the growing political tension in our nation and call it a cold civil war. Others say it's nothing more than the culture war of the last three decades, amplified beyond reason by social media. David French argues that it's something else--the beginning of a national separation that could very well end in secession. An engaging mix of cutting edge research and fair-minded analysis, Divided We Fall is an unblinking look at the true dimensions and dangers of this widening ideological gap, and what could happen if we don't take steps toward bridging it. French imagines a near future where the states are no longer united. He illustrates several chillingly plausible national break-up scenarios, and unpacks the significant--and often surprising--domestic and global consequences of such an event. But our future is not written in stone. There are solutions, but they aren't easy and they require an awakening. They require the rediscovery of old American constitutional principles combined with a dose of humility for all sides. If we want to remain standing, we must learn to stand together again.