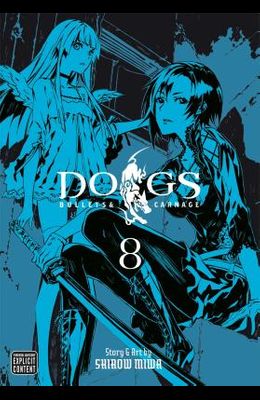 Part of the Dogs: Bullets & Carnage Series
by
Shirow Miwa

An action-packed, stylish shoot-'em-up. Boasting furious action, switchback plotting, magnetic characters and dazzling art, Dogs tells the story of four individuals struggling to survive a dystopian urban future by gun and sword and courage and luck. The devastating assault launched from the Below creates unrest among the residents of the Underground. When Miss Liza learns the truth behind the kidnapping of the Lost Children, the mutual distrust and anger only grow, with potentially fatal results. Heine's partnership with Badou is also badly strained, but his biggest problem by far lies in Naoto's hands: the black sword made to fight against his kind, the one weapon that can kill him. When figures from Heine's past return to confront him, will Naoto act as his ally...or his enemy? Reads R to L (Japanese Style) for mature audiences.