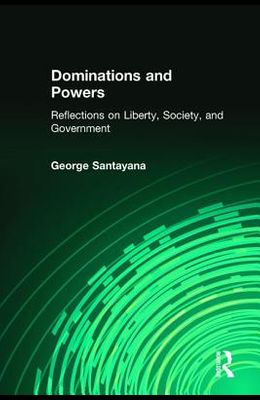 Dominations and Powers: Reflections on Liberty, Society, and Government

In what must be ranked as a foremost classic of twentieth-century political philosophy, George Santayana, in the preface to his last major work prior to his death, makes plain the limits as well as the aims of Dominations and Powers: All that it professes to contain is glimpses of tragedy and comedy played unawares by governments; and a continual intuitive reduction of political maxims and institutions to the intimate spiritual fruits that they are capable of bearing. This astonishing volume shows how the potential beauty latent in all sorts of worldly artifacts and events are rooted in differing forms of power and dominion. The work is divided into three major parts: the generative order of society, which covers growth in the jungle, economic arts, and the liberal arts; the militant order of society, which examines factions and enterprise; and the rational order of society, which contains one of the most sustained critiques of democratic systems and liberal ideologies extant. Written at a midpoint in the century, but at the close of his career, Santayana's volume offers an ominous account of the weakness of the West and its similarities in substance, if not always in form, with totalitarian systems of the East. Few analyses of concepts, such as government by the people, the price of peace and the suppression of warfare, the nature of elites and limits of egalitarianism, and the nature of authority in free societies, are more comprehensive or compelling. This is a carefully rendered statement on tasks of leadership for free societies that take on added meaning after the fall of communism. The author of a definitive biography of Santayana, John McCormick provides the sort of deep background that makes possible an assessment of Dominations and Powers. He permits us to better appreciate the place of this work at the start no less than conclusion of Santayana's long career. For the author of The Life of Reason himself admits to having led a life in unreason--deeply impacted by the war of 1914-1918, DEGREESand then again, 1939-1945. McCormick provides in his opening essay a careful story of Santayana's exile from his Anglo-American homeland, a deeply embittered figure in search of options to annihilation at the military level and an alternative to false and fatuous ideologies at the spiritual level. We know better now how to cope with this profound, yet disturbing classic in political thought.