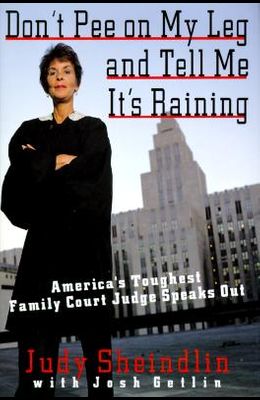 Don't Pee on My Leg and Tell Me It's Raining

How many mornings have you opened the newspaper only to read about another violent crime committed by a juvenile? Are you outraged when the rights of a criminal take precedence over the rights of the victim? Do you ever feel that people should start taking responsibility for their own actions and stop using the rest of society as the scapegoat? Judy Sheindlin knows these feelings all too well. After more than two decades serving in New York City's family court system, she has seen, heard and now she shares it all in Don't Pee on My Leg and Tell Me It's Raining . The time for change was yesterday and the time to wake up is now. The problems Sheindlin encounters daily -- welfare abuse, juvenile violence, abandoned or abused children, ugly custody fights -- reflect the growing destruction of America's families. They are a mirror of what has gone wrong in America; a reflection of how far we have strayed from personal responsibility and old-fashioned discipline. Rich in courtroom detail, with eye-opening expos, s of government stupidities and legal chicanery, Don't Pee on My Leg and Tell Me It's Raining tells tales from the dark side of human nature. You will encounter welfare deadbeats who rip off the system and duck an honest day's work -- until Sheindlin cracks the whip, forcing them to find jobs. You will learn about a beautiful teenage girl who was murdered on her way home from school by other girls for a pair of earrings. You will meet a subway mugger who became a millionaire by suing the police who arrested him. A fiercely intelligent, flamboyant, tough-talking mother of five, Sheindlin examines the problem of America's fraying family fabric and says publicly what most citizens feel privately: Juvenile delinquency is out of control and young criminals must not be treated lightly by the court system any longer. Ultimately Sheindlin says that the answer to most of society's problems can be summed up in one word -- Responsibility. Society must demand that people grow up and accept responsibility, she writes. The folks who insist that we continue to tolerate abuse by self-described victims should get the message -- not anymore.